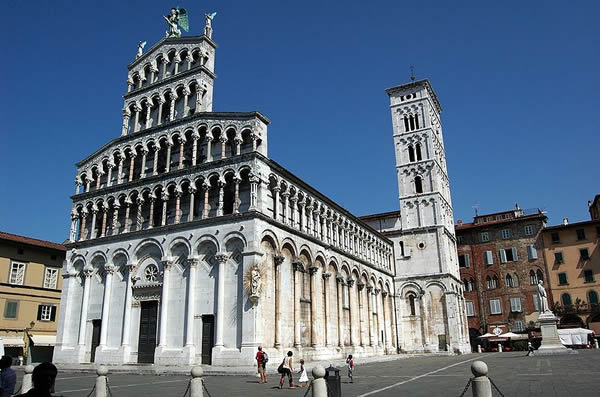 The origin of Lucca is uncertain: it was probably founded by the Ligurians or by the Etruscans, but it certainly became a Roman colony in 180 b.c.

Lucca still preserves many charachteristics of its ancient origin. Traces of the Roman city can be seen in the elliptical-shaped Piazza dell'Anfiteatro (site of the Roman amphitheater) and in the Piazza San Michele (site of the Roman forum and meeting point Lucca for today's Lucca inhabitants), dominated by the omonimous romanic church with its white façade. The most evident heritage of Roman times is anyway the rectangular grid and the street plan of the historical centre.

Lucca is mostly famous for its ancient walls (almost intact as never been used for defense puroposes), that have became a pedestrian promenade which encircled the old town

Lucca has been named “the city of 100 churches” and in its centre you also find medieval towers, bell towers and renaissance buildings. The religious heart is the cathedral square, with San Martino church.