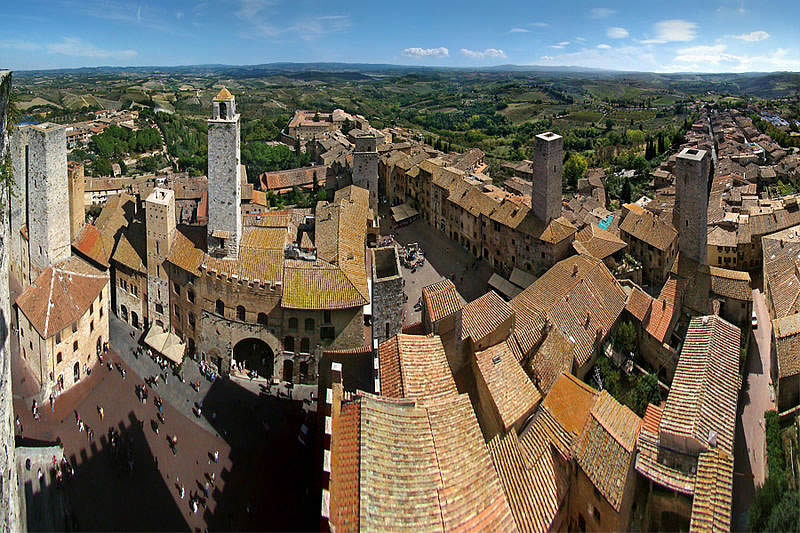 San Gimignano, with its almost intact urban structure, it's one of the best examples of European medieval architecture: it has been declared as a World Heritage Site by Unesco. San Gimignano (of Etruscan origin) rises on a hill dominating the Elsa valley and sits on the ancient “Via Francigena”. The centre of San Gimignano is entirely surrounded by thirteent-century walls. Piazza del Duomo and Piazza della Cisterna are the main squares, where the main streets (Via San Matteo and Via San Giovanni) converge.

The cathedral has a nave and two aisles, totally frescoed. San Gimignano The town hall (once Podesta's residence) houses the civic museum and the picture gallery. San Gimignano is mostly famous for its towers and known as the Manhattan of the Middle Ages, The Podestà's tower (known as “Rognosa”) is the most ancient one, while the Torre Grossa is the highest tower. In the Middle Ages San Gimignano had 72 towers, built as symbol of families' power in continuos struggle for dominating the town. Today there are only 14 towers left and they contribute to make San Gimignano unique.

San Gimignano stands out among the sienese hills, surrounded by vineyards, and it's famous for its production of white wine (Vernaccia di San Gimignano) and saffron. In San Gimignano, thanks to its perfectly preserved architecture, to good food and wine, you can enjoy a magic “return to the past”.